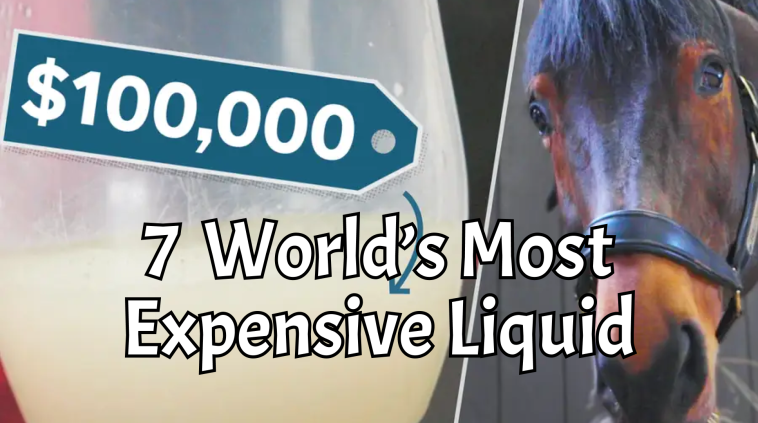 Thinking about expensive liquids, the first thing that might come to our mind might be anything from wine to venom to human blood.

But what makes it the world’s most expensive? You have to consider the rarity, utility, scientific value, and taste.

There are ridiculously expensive liquids such as the $3.7 million Billionaire French Vodka, whose bottle is embedded in thousands of diamonds and rare crystals. But it is not included in the list. Let’s focus on liquids whose value is in the liquid itself and not inflated by other means. Without fancy bottles or pro bono diamond rings.

Here are the 7 most expensive liquids in the world.

Horseshoe crabs are one of the most ancient surviving creatures in this world. They live with the dinosaurs for hundreds of millions of years in nearly the same physical form they are today.

Their unique blue blood contains amoebocytes, single-celled creatures that detect and attack bacteria. They can be farmed into a chemical called coagulogen, which is the basis for the most sensitive bacteria test on earth.

Unfortunately, for this ancient creature,  hundreds of thousands of them are bled alive every year for their blood.

LSD is one of the most potent, mood-changing chemicals. It is manufactured from lysergic acid, which is found in the ergot fungus that grows on rye and other grains and it is created synthetically in the labs. Lysergic acid was further developed for its psychedelic properties until a full-blown commercial hallucinogen was born.

The rare toxin called “Ohanin” is one of the world’s most potent painkillers. It is 20 times more powerful than morphine. It’s a high concentration of this toxin that makes the venom of King Cobras coveted for its medicinal properties.

What makes Big Star a “big-star”, he has won double gold medals, making him one of the most coveted genetic lines.

Considered to be the world’s most expensive alcohol. The Macallan 1926 is a bottle of scotch from the legendary cask 263, often called the holy grail of Scotches for the world’s most avid collectors.

The Macallan 1926 is aged in a special ex-Sherry cask and preserved for six decades. The taste, the vintage value and the cask is the best in the world and has earned multiple awards in the world of wine making it the 3rd most expensive liquids in the world.

This particular scorpion venom has a possible treatment for many chronic ailments, from autoimmune conditions like rheumatoid arthritis and lupus to certain cancers. It is also one of the most effective “pain relievers,” as well as a strong antimicrobial.

Scientists are currently conducting more research into scorpion venom to determine if it has long-term promise as a treatment for staph infections and tuberculosis or as a future cure for arthritis. The limitless potential of high-quality scorpion venom has driven its prices sky-high making it the second most expensive liquid in the world.